Colorado’s statutory scheme for drug offenses is highly complex and is evolving quickly. For the most part, it is changing for the better: Penalties are lessening, and opportunities for eventual records sealing are increasing, even in certain cases that result in convictions. In this context, it is essential that you have a Boulder drug defense lawyer who understands and is skilled in working with the current drug laws. Schedule a free consultation with us today, call 303-593-1874 or message us online.

Why Choose A Boulder Drug Defense Lawyer From Dolan + Zimmerman? 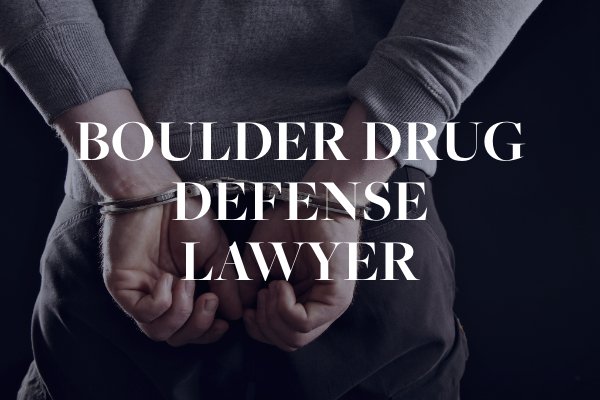 Do Not Assume Drug Crimes are Lightly Penalized

Because of the recent favorable changes in drug laws, it is easy to assume that drug charges are not a big deal. That is not the case.

Drug felonies still carry potential prison sentences. Only some types of convictions for drug offenses allow for eventual file sealing; the number of years before file sealing is available vary greatly on the level of the offense. Additionally, drug-related cases frequently present highly complex factual and legal issues and consequently are often more defensible than you may initially assume.

You need a Boulder drug defense attorney who is skilled in navigating this technical and complex area of law. That is exactly what you will find at our firm. Our attorneys have experience in every aspect of drug crime defense, including jury trials. They will aggressively pursue an approach that is right for you. We handle all types of drug charges related to marijuana, meth, cocaine, prescription drugs, heroin, and others, including:

When Should I Hire A Boulder Drug Defense Attorney? 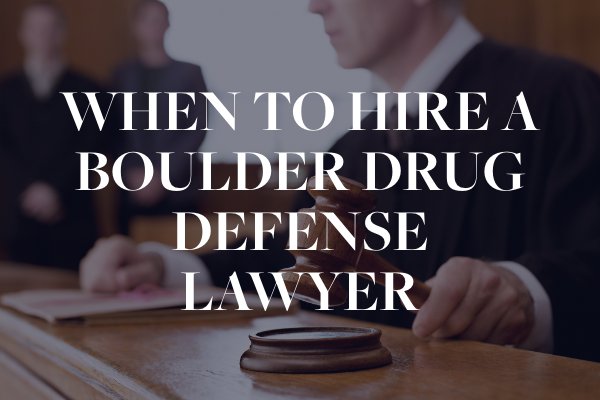 Hire an experienced drug possession lawyer as early on in your case as possible. One of the biggest mistakes that individuals make in drug cases is waiting to seek the help of a Boulder defense lawyer.

If the police question you about a drug possession crime, anything you say can be used against you throughout their investigation and eventually in court. Even if you are innocent, your words can get twisted around and turned into something you did not intend. The sooner you get a Boulder drug defense lawyer by your side, the better the chances for a satisfactory outcome. They will be your best guide throughout the entire process, from arrest to preparing for hearings and trials.

There are numerous ways to defend Colorado drug possession cases, dismiss a charge, or reduce the level of penalties. Some of the possible defenses can include:

One of the most common defenses to drug charges is that someone else planted the drugs on you or in your car/home. This defense is most successful if there is no history of drug use or if the drugs found are not consistent with your normal drug use. Your lawyer can argue that either a civilian or the police planted the drugs.

To support this claim, you can also provide evidence that you do not have any paraphernalia typically used for selling or distributing drugs. For example, no scales or little baggies were found with the drugs. Additionally, you can show that certain evidence came from legitimate sources. For example, if the police find a large amount of cash in your home, this could be interpreted as evidence that you were selling drugs. However, if you can show that the cash is from your paycheck or other legitimate sources, this could help support your claim that the drugs were for personal use only.

To successfully use this defense, you must be able to show that the police did not have probable cause to search your property or that they violated your Miranda rights when they questioned you about the drugs. For example, if the police searched your home without a warrant or without probable cause, any evidence they find can be suppressed and cannot be used against you in court. Likewise, if the police question you about the drugs without informing you of your Miranda rights, anything you say can also be suppressed, and if what you said led them to the drugs, the drugs should be suppressed as well.

While all of these are potential defenses that can be used in a drug possession case, an addiction to the substance cannot. Admitting to an addiction indicates that you once possessed an illegal substance to form your dependency in the first place.

Voluntary consent is when you give the police permission to conduct a search without them having to first get a warrant. For example, the police pull you over for speeding and ask if they can search your car, or they knock on your door and ask to search your house. If you say yes, then you’ve voluntarily consented to the search.

It’s important to note that you are never required to consent to a search—no matter how friendly or persuasive the officer is. If the police don’t have a warrant and they ask to search you or your property, you can (and should) politely decline.

Why You Should Think Twice Before Consenting to a Search

There are a few reasons why you might want to think twice before consenting to a search, even if you have nothing to hide. First, the police may misinterpret your consent as an admission of guilt. Second, even if you don’t think the police will find anything incriminating during the search, anything they do find can be used against you in court. Finally, if the police do find something incriminating during the search (even if it’s just drug paraphernalia), they may arrest you on the spot.

A protective sweep is a quick search of an area incident to an arrest. The purpose of the sweep is to make sure that there are no dangers present, such as another person who might attack the arresting officer or try to escape, or hidden weapons. The police officers are not looking for evidence during a protective sweep.

The Supreme Court has held that the police can conduct a protective sweep without a warrant if they have a “reasonable belief based on specific and articulable facts” that there is danger present. In other words, the police need more than just a hunch that there might be danger; they must have some concrete evidence to support their belief.

However, the Supreme Court has also held that the sweep must be limited in scope and duration. The officers can only look in places where someone could reasonably be hiding. They cannot tear apart furniture or walls, and they cannot conduct an overly-thorough search of the premises.

When you are arrested, the police have the right to search you and your belongings for evidence of a crime. This is called a search incident to arrest. The police may also search the area around you for evidence. The police can only search as far as is reasonably necessary to find evidence of a crime. For example, if the police are looking for drugs, they may only search areas where drugs are likely to be found. This means that the police cannot conduct an unreasonable or intrusive search.

In the United States, police have the power to stop and frisk people without a warrant if they have reasonable suspicion that the person has committed or is about to commit a crime. This power is important because it allows police to prevent and solve crimes before they happen. However, this power can also be abused, and it is important to know your rights if you are ever stopped and frisked by the police.

What are the Colorado Drug Classifications? 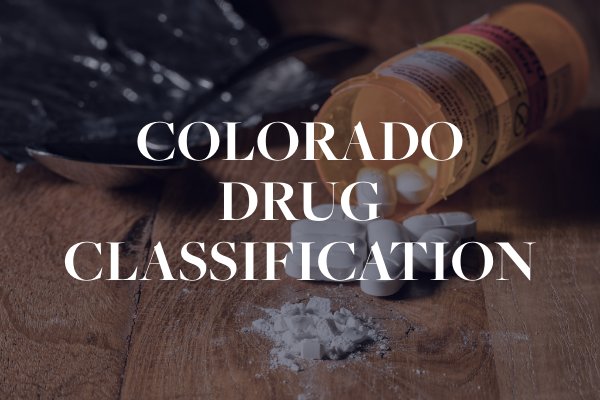 Colorado drug law classifies controlled dangerous substances under five Federal drug “schedules.” They are categorized in descending order of their risk of addiction, the potential for abuse, and medical uses.

Schedule I
The most dangerous substances that have a high risk of addiction or dependency and no accepted medical use. Drugs included are LSD, heroin, PCP, psilocybin (magic mushrooms), mescaline, and peyote.

Schedule II
Drugs that have a high risk of abuse but may have legitimate medical uses. These include substances such as opium and prescription opioid medications like oxycodone (OxyContin), cocaine, methadone, methamphetamines, and amphetamines.

Schedule III
Slightly less dangerous drugs than Schedule II substances and have an accepted medical use, but still, have a moderate risk of dependency. For example, codeine, anabolic steroids, testosterone, ketamine, barbiturates, and some depressants.

Schedule IV
Drugs that have a lower potential for dependency and have accepted medical uses such as diazepam (Valium), some tranquilizers, and non-barbiturate sedatives like zolpidem (Ambien).

Schedule V
The least dangerous drugs that have a very low risk of abuse and include things like over-the-counter cough syrups or cold medications with minimal amounts of Codeine.

The type of drug you are accused of being in possession of impacts the charges and potential penalties you face if you are convicted. The lower the drug is scheduled, the harsher the punishment will generally be. Not all of these above-listed drugs are illegal, even without a prescription, but your charges can still be based on how a legal drug is used.

What are the Penalties for Drug Possession in Colorado?

The criminal penalties associated with possession differ depending on the charge you are facing, based on the type and amount of the CDS you had.

The penalties and charges can be less severe if you are accused of possessing less than one gram of any CDS. On the other hand, the penalties can be enhanced if the prosecutor believes that you possessed the drugs with the intention to sell or distribute them.

In your first consultation, we will review your case, explain your best options and help you better understand what to expect from the defense process. To schedule a time to speak with one of our Boulder drug defense lawyers, please send us an email or call our office.