Domestic violence (also known as intimate partner violence, battering, or spouse abuse) is a pattern of abusive behavior used in a relationship to gain control and power over an intimate partner. It happens to everyone across race, gender, socioeconomic status, education, and sexual orientation. According to a report by the United Nations, more than 500,000 women were killed worldwide by an intimate partner or family member in 2017. 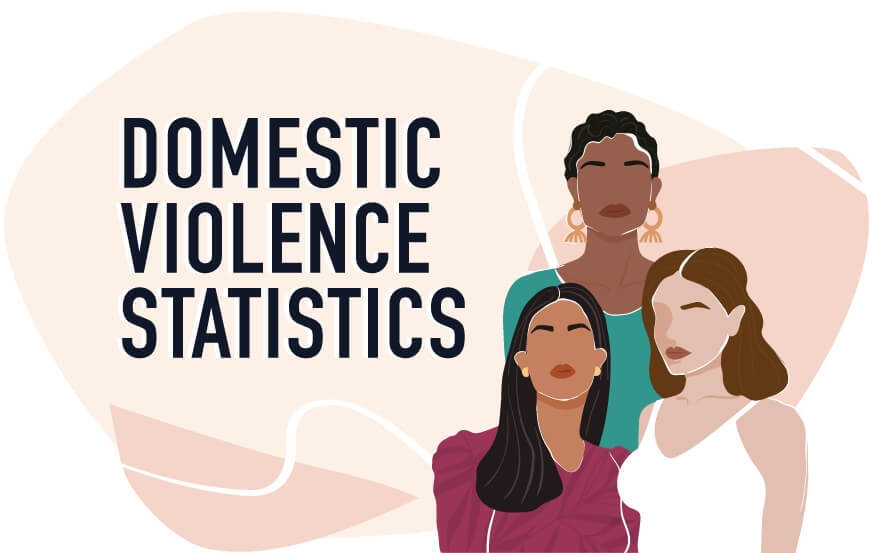 Incidents of domestic violence have shown a significant increase during COVID-19 – “a pandemic within a pandemic.”

How Often Does Domestic Violence Occur in the U.S.?

What Are the Reasons Behind Domestic Violence?

In every instance of domestic violence, a person chooses to commit abusive acts, based on his or her belief system – when they can choose not to.

“We do what we know and we know what we see. That’s how we form everything. If I’ve grown up in a house where behaviors such as expressing anger by punching a wall or yelling or pointing your finger in someone’s face have been normalized – that’s my reality. That’s what I know. Sometimes there are cultural influences that are ingrained with patriarchy – like ‘man of the house.’ It’s tough because they are generalizations we have ingrained as a society,” explains John Sharp, who previously managed the Battering Intervention and Prevention Program at Hope’s Door New Beginning Center.

Battering Intervention and Prevention Programs (BIPP) are there to change existing belief systems, and people who have previously learned to abuse others can change their behaviors, but only if they have the desire to change and are committed to changing in all aspects. 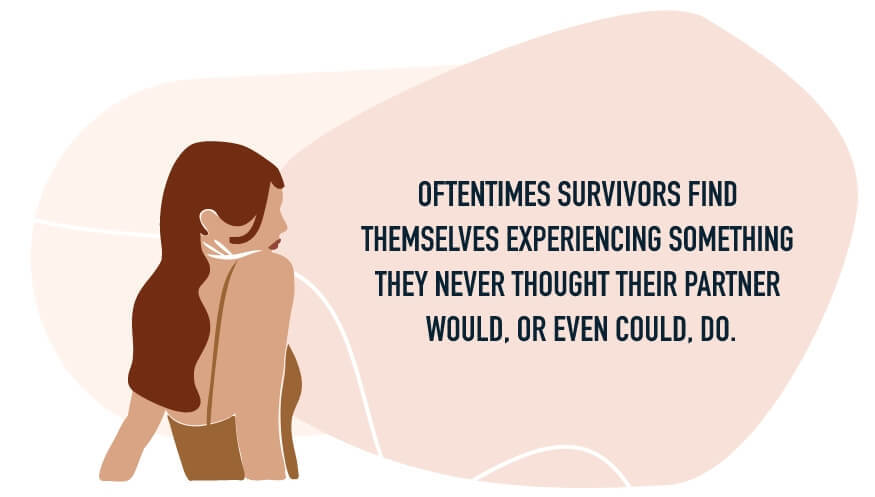 “Escalation describes the process by which controlling behavior becomes more frequent, less disguised, more damaging, and closer to lethal over time.” It is when the abuse gets worse, either gradually or slowly – when the abuser escalates their power or control over you and you no longer can deny the gravity of the situation. As the National Domestic Violence Hotline wrote:

Over the course of an abusive relationship, it is common for abuse to escalate, and oftentimes survivors find themselves experiencing something they never thought their partner would, or even could, do.

It can help to know which traits or external factors can contribute to domestic violence or escalate the pattern or behavior of abuse. For example, people who are jealous and insecure often treat their romantic partners as property, talk down to them as if they are not equal partners, and do not give equal weight to their individual freedoms as much as their own.

According to the American Psychological Association (APA), the following factors can increase a person’s chances of becoming an abuser:

Where Does Domestic Violence Most Often Occur?

According to the National Coalition Against Domestic Violence (NCADV), intimate partner violence increased by 42 percent from 2016 to 2018 and now makes up over 20 percent of all violent crime.  The likelihood of someone, male or female, becoming a victim is high, no matter where they live.  However, some states have larger issues with domestic violence than others.   According to the NCADV, 49.1 percent of women and 40.7 percent of men in Oklahoma will experience domestic violence at one point in their lifetime, the highest for either sex in any state. 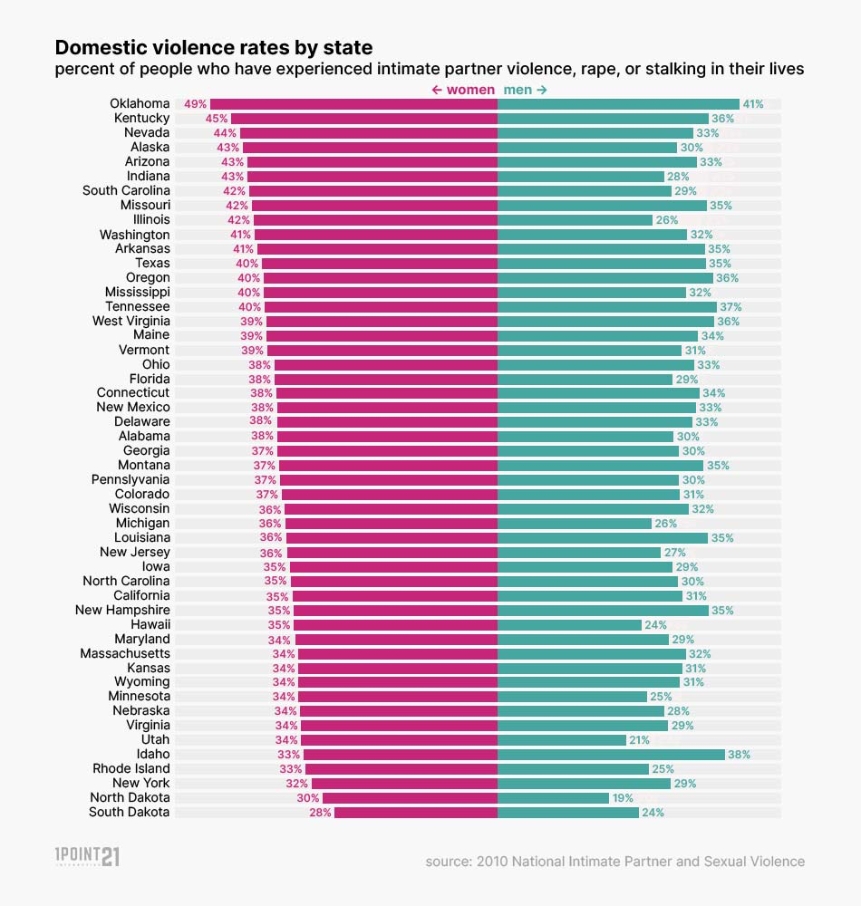 10 States with the Highest Rate of Domestic Violence Victimization

10 States with the Lowest Rate of Domestic Violence Victimization

Who Are Most Often Victims of Domestic Violence?

While domestic violence happens to everyone, there are some factors that can increase the risk of being victimized. According to the APA, intimate partner violence victims are more likely to be:

Women are most likely to be in an abusive relationship in their twenties – specifically ages 18 to 34. 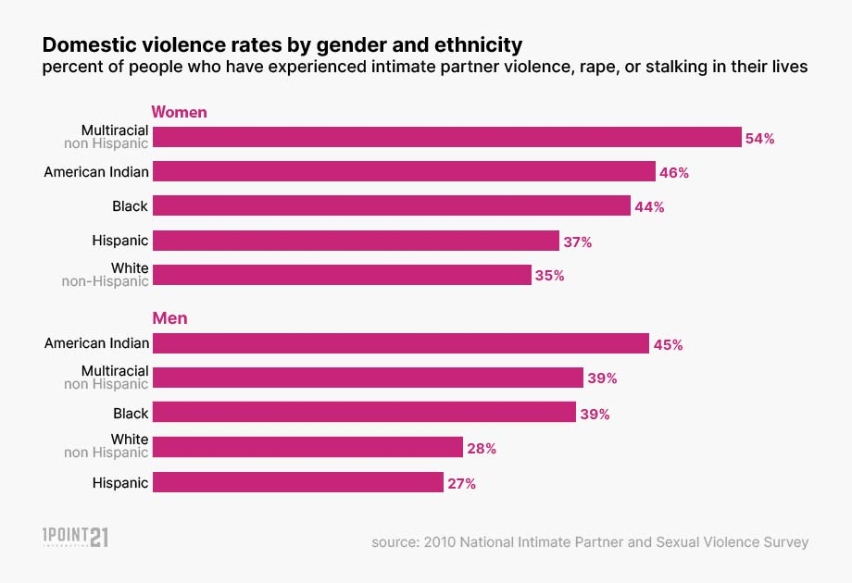 According to the CDC’s 2010 National Intimate Partner and Sexual Violence Survey:

Domestic violence occurs at the same rates, or at higher rates, in LGBT relationships than in heterosexual couples.

According to the NCADV:

According to a report by the National Coalition of Anti-Violence Programs:

The presence of a firearm in the home can turn an already dangerous domestic violence situation deadly. 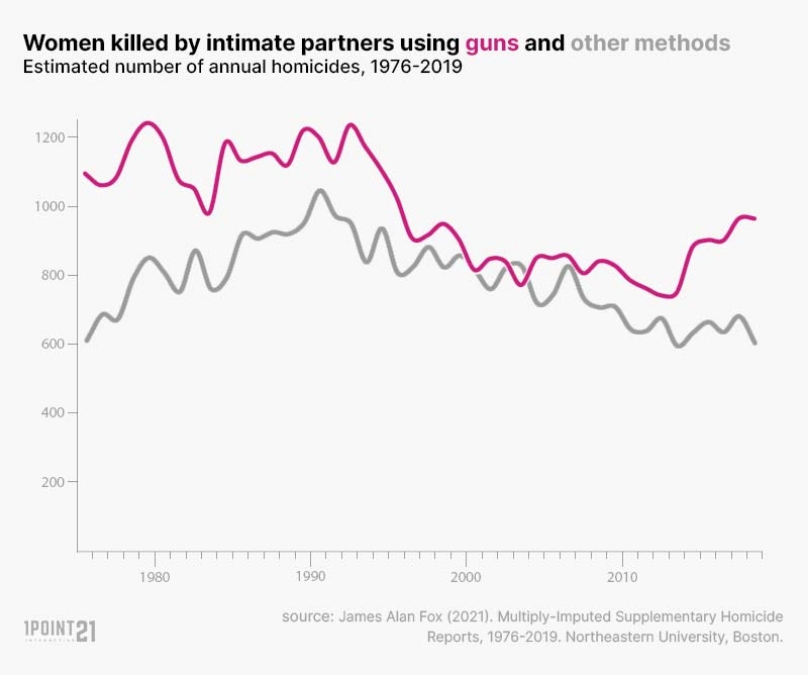 According to a report by Everytown:

In a 2018 survey of victim calls to the National Domestic Violence Hotline:

Domestic Violence Increase During the Pandemic

During the COVID-19 pandemic, incidents of domestic violence spiked worldwide. During quarantine, when there is no option but to stay inside – an abuser is given more chances to control the victim. While domestic violence remains significantly underreported, the number of incidents reported to the police showed an increase during the pandemic.

According to the American Journal of Emergency Medicine, from March 2019 to March 2020:

A frequent question is: Why don’t victims of abuse leave their abusers? Why do they choose to stay in an abusive relationship? The truth is leaving isn’t always an option and victims typically face many safety and economic barriers when even considering leaving. For example, a controlling spouse could use child custody as a threat.

The most dangerous time for a victim is after she leaves her abuser. Leaving an abusive relationship isn’t a matter of courage, but it’s a matter of not wanting to die. 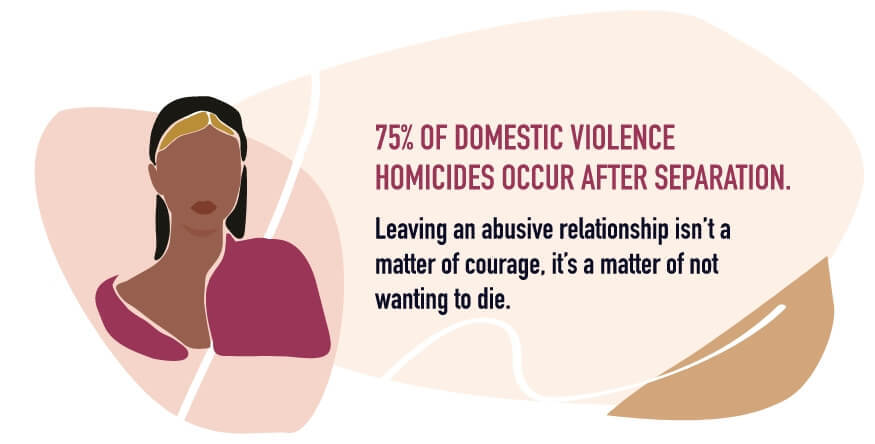 Effects of Domestic Violence on Victims

Every day, domestic violence affects individual families and the country as a whole.

According to the NCADV:

Effect of Domestic Violence on Children

When many people think of domestic violence, they think of physical abuse, but the truth is domestic violence isn’t always visible to the eye. Domestic violence is anything that is done to gain power or control over an intimate partner, and it can include manipulation or threats through money, words, immigration status, child custody, or social media. Over half of all college students (57 percent) say it is difficult to identify dating abuse, and they are not alone.

Types of domestic violence can include:

While the progression of abuse and violence is gradual, there are behavioral signs, red flags, that show up in the early stages of the relationship that are easy to brush aside in the moment. Because we love them and we see the best in them. Or we believe this can’t be who they really are. We want to trust that the person we love would not hurt or harm us – and if they did, that it was a one-time occurrence and it won’t happen again.

In her TED talk on domestic violence, Leslie Morgan Steiner talks about how her abuser idolized her in the beginning, how he created the illusion that she was the dominant partner in the relationship. When he told her he left his dream job because of her and wanted to move out of the city – somewhere away from her family and his dysfunctional family, she didn’t perceive it as an attempt to isolate or control her, but as love. She willingly quit her dream job and moved with him because she thought love was about making sacrifices. While he wasn’t physically violent with her until days before her wedding, he was isolating her by taking her away from her family, friends, and career, and instilling fear in her when he purchased guns later on and kept them on him at all times. The first time he was physically violent with her was when she was frustrated about an assignment and he used her anger as an excuse to choke her.

What to Look for

An abuser may not be physically violent until much later in the relationship. This is why it is important to understand early signs of unhealthy relationships and to pay attention to how someone reacts to you when the situation isn’t going as planned for them – how they speak to you when they are angry or frustrated with you. Are they complimenting you in a back-handed way or making passive-aggressive comments or insults? Does their behavior change when you are alone or in public?

The beginning of a relationship is when both people are displaying the best versions of themselves. Therefore, if someone cuts off a driver or behaves impatiently and rudely with a waitress on your third date, and that makes you worried or uncomfortable, it means something; trust that feeling. If you are afraid, it is for a reason – because something about this person doesn’t feel right. While it may seem harsh to get out of a relationship because of something like that, the best time to leave is early on, before you are entangled in the relationship and the behavior escalates.

Questions to Ask Yourself

Are they reacting out of insecurity, jealousy, and anger, but masking it as love or protection? When you are running late, forget to pick up groceries, or talking to a male friend, are you afraid of how they will react, or what will happen if they find out? Do they make you feel like their anger is always your fault, your responsibility?

Remember that everyone deserves a respectful, healthy, and safe relationship and nothing ever justifies abuser violence. You can make a mistake, show up late, act imperfectly, and it still doesn’t give anyone the right to take out their anger on you in any form of violence.

According to the Domestic Violence National Hotline, even one or two of the following behaviors in a relationship could be red flags:

Stalking can also be a predictor of domestic violence.

Learning to Set Healthy Boundaries Early in the Relationship

It is important to understand that victims of domestic violence aren’t necessarily codependent, to begin with, but can become codependent as a result of the abuse. In a fact sheet on codependency, Mental Health America defines boundaries as the physical and emotional limits we set to protect ourselves from being manipulated, or used by others. Therapist Kristen Flow explains that boundaries have to do with what we need in order to feel safe and respected. Remember that you have every right to set clear boundaries for yourself, and you never have to explain or defend them.

The third step is the most difficult, but also, the most important. The second someone crosses a boundary we have set early on in the relationship and we let it go instead of enforcing it, they learn that there are no consequences to their actions and they are likely to repeat that behavior. Abusers know they have gained power over someone when a person repeatedly forgives them and gives in to their demands – slowly relinquishing his or her own power.

All forms of intimate partner violence are preventable – and the best pathway of prevention is teaching and promoting healthy, respectful, and nonviolent relationships, starting at a young age. It is important that kids understand and see what healthy relationships look like, are able to identify unhealthy signs of a relationship, and learn how to take themselves out of a bad situation or relationship, safely but assertively. It is important that children understand the difference between a loving, healthy, and safe relationship and an unhealthy one, so they are able to make choices that support their well-being. Children need to learn early on that controlling behaviors are not the same as love and protection; no one should make you feel afraid in the name of love.

We must have conversations with our children, teaching them:

“Our advocates are available 24/7 to discuss your situation and identify available options to help ensure your safety.”

“Love is respect offers 24/7 information, support, and advocacy to young people between the ages of 13 and 26 who have questions or concerns about their romantic relationships. We also provide support to concerned friends and family members, teachers, counselors, and other service providers through the same free and confidential services via phone, text, and live chat.”

Our mission is “to develop and promote accessible, culturally relevant, and trauma-informed responses to domestic violence and other lifetime trauma so that survivors and their children can access the resources that are essential to their safety and well-being.”